A gentle and loving treat, Mirai is a perceptive film teaching lessons only the best of us really learn in childhood.

Four year old Kun’s domestic bliss is rudely interrupted by the arrival of an as-yet-unnamed younger sister at the film’s open. He reacts as so many older siblings have before him, acting out and desperately seeking the attention of his newly distracted, ad similarly unnamed parents. Kun, forgivably for his age, is struggling to conceptualise his family as fully-realised people.

On a storming strop around his house’s garden, Kun’s self-righteous grump is halted in its tracks by the appearance of an anthropomorphic apparition – the soul of the family dog, Yekko. This is followed in short order by a future, older version of his infant sibling, dispensing wisdom, and even his deceased grandfather’s younger self. Each visit helps Kun to open his eyes a little more to the lives of the adults around him, and those that came before them.

The central messages Mirai brings to the table are heartfelt and in places heartrending. Kun is improbably young, a common enough issue with some anime, but the struggle to consider the scale of experience your older family members have gathered is a universal one.

Writer-director Mamoru Hosoda does a worthy job of balancing the mundane with the fantastical throughout Kun’s reveries and daily life. Exposure to historical detail and visions family myth is balanced against the struggle to ride a bike, or how a freelance working dad can be distant during the day. These notes play off each other delightfully, and do a tremendous job of evoking the experience of growing up.

The animation and visual design of Mirai is similarly mutable. The realism of modern items like branded laptops, motorcycle engines and home furnishings are contrasted with impressionistic seascapes, sepia-toned flashbacks and elastic facial features. This lends the film a further feeling of fantasy, mundanity and wonder mixed together through the eyes of a young child learning about the scope of the world. 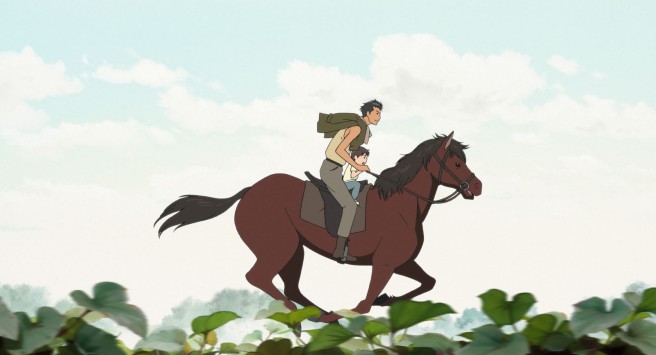 Families, and family drama, are often in the background of the sort of anime that jumps to Western cinema audiences – relegated behind bildungsroman narratives or adventurous twists. Mirai smartly foregrounds the children’s parents, humanising them gradually and with restraint, to show Kun’s journey toward accepting the importance of other people’s happiness and security alongside his own.

Mirai is a lovely, kind-hearted film that keeps its aims relatively modest and thrives in its own context. Its scope plays with anime tropes to threaten transportation to parallel worlds or hidden conflicts, but smartly ties itself to a family home and a family dynamic to tell a delightful story.