Scrabbling desperately through narrow tunnels gives way incrementally to empowered exploration and secret-sweeping in Team Cherry’s excellent Hollow Knight, re-released to fanfare on Switch. This is a medtroidvania dungeon-crawler that stands alongside greats of the genre. 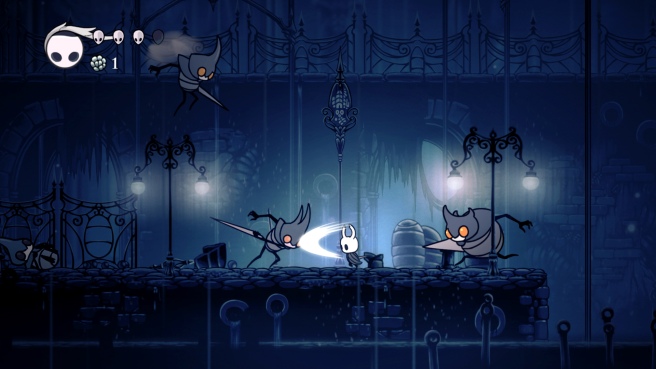 In a subterranean world of insects, players play a diminutive knight armed only with a rusted nail, who awakens to explore the decaying land of Hallownest, a decrepit ruined kingdom. Starting in a tiny surface-hamlet, Dirtmouth, a sprawling underground map is waiting to be probed and documented. The player is initially blind to their location, but soon discovers that in each new environment they can seek out a map-maker to give them a sense for their surroundings.

Cornifer, the studious bug in question, is one of a quirky set of itinerant characters who explore the world alongside the knight. Their dialogue is cute and spare, voiced in quintessentially Nintendo grunts and tics. Through them, scraps of lore left around, and the tale told visually by the biological horrors uncovered in the deep, the story of this dying realm is coyly told.

This narrative is delivered with enigmatic panache; in practice, this means that it is engaging for those who enjoy it, but practically avoidable for those who prefer a more skill-based focus. The meat of Hollow Knight is its action and platforming – an almost bizarrely wide range of enemies (150 all told) offer at times teeth-grinding challenge. Meanwhile a movement set that widens glacially from a single hop to eventually span a delightful range of options enables traversal trials that satisfy in the vanquishing.

In classic genre style, as players expand the scope of their movement and abilities the map opens up for them, with unreachable passages opening or barriers becoming passable. A perfect demonstration of Hollow Knight’s quality comes when these abilities are earned – players are not pointed straight at their next step, but left to dimly remember gateways that they couldn’t get past, in far-flung reaches of the map. The triumph is that these impasses are memorable without feeling signposted.

Another nod to old-school exploration games can be found in Hollow Knight’s denouement. There are multiple endings here, but not in an equal split. The vast majority of players will see one conclusion, and accept the thematic resolution it brings. Those who want more optimistic final notes will have to get through a couple of incredibly (arguably overly) challenging sequences in well-hidden locations. Any disappointment that these endings are so hard to enable is outweighed by the acceptance that ‘secret’ segments should be just that, and that reserving the game’s most challenging moments for its most dedicated players is, if anything, a smart call from Team Cherry.

Hollow Knight is a delight, longer and more rewarding than it promises or has any right to be. Its crumbling world is a sometimes panicky, sometimes serene and always tantalising lesson in level-building and progression. The tiny Team Cherry’s next work will be one to watch.