Political wrangling is in vogue, alongside populism, widely-disseminated lies and the utter absence of morality – what better time to revisit the life of Rome’s great statesman, Cicero? This epic double play from Mike Poulton, adapting Robert Harris’s novels, runs to 7 hours but feels consistently fresh and portentous. It is high entertainment, with pointed barbs at present scenarios aplenty. 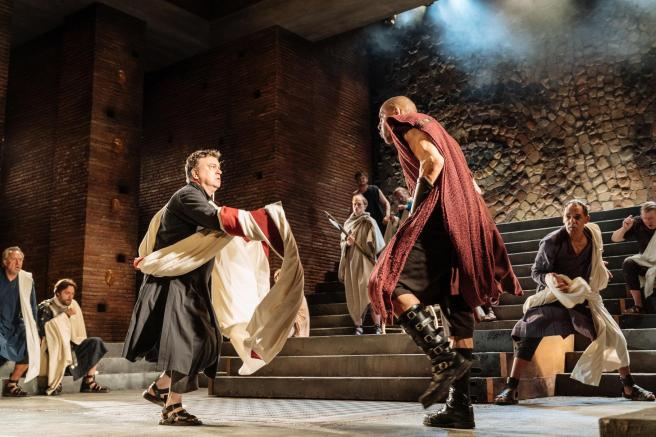 Richard McCabe is our Cicero, and has found perhaps his perfect role. From the gifted orator’s early days strutting in the senate as an unfancied outsider, to his later period as a freshly-ostracised ‘Father of the Nation’, this is a performance of superb variety, wit and understanding. McCabe has crucially accepted the flaws of this likeable man, and treats his audience to a tragic arc.

Cicero played witness to some of Rome’s most famous and formative moments, but those less familiar with the history have a useful cipher in the form of Tiro, his slave secretary, played drily by Joseph Kloska. This narrative device worked well for Harris on the page, and Kloska’s everyman sarcasm translates Tiro’s function into a welcome presence. Cicero’s self-importance is well-punctured, but his towering achievements are also reiterated by this, his most ardent supporter.

A slithering cast of political and military maneuverers are, of course, constantly moving against the republican ideals of our protagonist, vying for power and an end to democratic opposition. From the blisteringly determined Julius Caesar (Peter de Jersey perhaps overdoing his fury at times) to the blustering and buffoonish Pompey (Christopher Saul), these figures are cannily compared to modern personalities, their machinations contrasted with Brexit, Trump and others.

The looming Joe Dixon is notably excellent in his switch between parts 1 and 2 from the role of Cataline, a wholly mad and violent conspirator, to the equally martial yet entirely more threatening Mark Antony. The second man’s nervous energy and unwilling work ethic mask a deeper malice. Here, and in a few other places, Poulton attempts to add some feminine wile to proceedings through the plans of the noxious Fulvia (Eloise Secker). It is perhaps a shame that in 7 hours this thrust still feels undercooked, along with the inconsistent presence of Cicero’s long-suffering wife Terentia (Siobhan Redmond), but the political reality of the time extends a certain measure of exculpation. 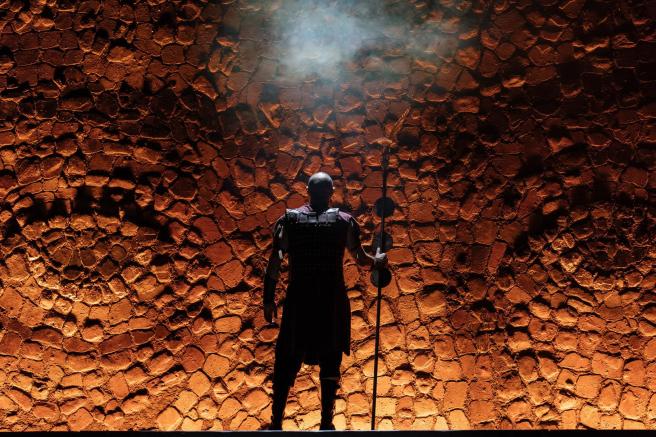 With lashings of irony throughout for those clued up on the fates of characters mentioned or previewed, Poulton’s writing is in modern mode, with intelligible and easily followed dialogue that avoids dreariness. Cicero’s set-piece speeches are faithful abridgements of their historical sources, and their rhetorical power is lasting in contrast to the patter of sarcasm and wit that abounds elsewhere.

Stressfully trickling towards an unsettling and fearful ending, the production’s crashing sound is a welcome augmentation. The set, designed by Anthony Ward, features a huge mosaic of a pair of eyes as its backdrop, with a stepped stage layout providing effective realisations of, at times, the senate house, dank basements, slum neighbourhoods and palaces. A central globe hangs above, projected upon to take on different properties as the play progresses, smooth gold steadily flaking away to reveal decay, but the production’s move from Stratford appears to have hampered its fidelity, meaning that it is more of a background addition than perhaps intended. 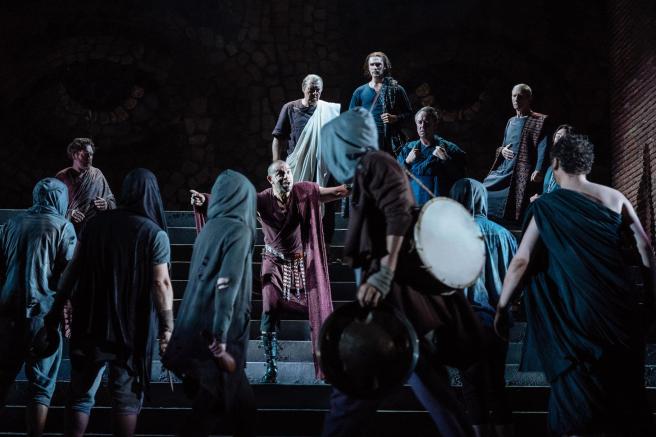 This is an important story, a long and enduring one, and its adaptation feels appropriately gauged. That it is exhilarating even in its final moments is testament to a considered and judicious approach to its most important lessons.