It’s a little harder to subvert hugely successful but ultimately staid superhero movies when your own franchise is comprised of them, as Deadpool 2 discovers. This sequel to what felt a relative breath of fresh air doesn’t do enough to justify its own existence.

After the first film’s improbably happy ending, Ryan Reynolds’s merc with a mouth is crushing it on the global hitman scene, an apparently moralistic contract killer with a gleeful home life. One signposted bereavement later, he resorts to the X-men to find solace and company. They soon find themselves entangled in the time-travelling angst of the suddenly inescapable Josh Brolin as Cable, as he hunts down the spunky Russell (Julian Dennison), a fire-fisted anger-ridden teen.

The plotting is prosaic but inoffensive enough – Deadpool 2 is far more interested in offending elsewhere. Returning from its previous iteration is a taboo-purged sense of humour that leans towards the consciously outrageous. This is a comedy at heart, after all, one that continually seeks to send up the po-faced blockbusters of Marvel’s wider lineup, and even more so those of competing studios. Its jokes are free-flowing but sadly only occasionally more than eyebrow-raising, if only because the core gags feel largely unchanged from the first film.

In Reynolds, however, the franchise possesses a truly charming lead, and he is given absolute dominance over the screen. Brolin briefly challenges him for the audience’s focus in the latter stages, but this is Reynolds’s show and he makes the most of it. His deliveries, regardless of writing quality, are reliably terrific. It’s a shame that the extensively trailed supporting cast are largely reduced to bit parts (and occasionally to bits). 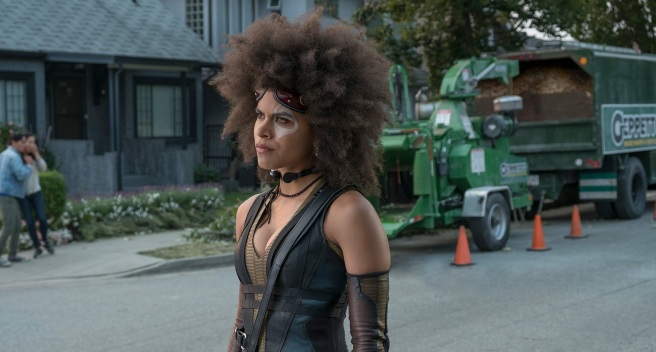 Only Zazie Beetz, as Domino, and Dennison are given room to stretch, and the latter is somewhat sadly confined to ground he trod more expertly in the fabulous Hunt for the Wilderpeople. Domino, meanwhile, is well-handled from the action perspective, her superpower of impossibly good luck setting off Rube Goldberg chains of events. Yet her actual characterisation is limited, a missed opportunity.

Regrettably, Deadpool 2 is also marred by noticeably shoddy effects work throughout, never more evident than in an extensive car-chase sequence that showcases some almost unfinished-seeming tableaus. Perhaps the effects team being granted an extension on their work might have afforded time for some rationalisation of the film as a whole. Especially after patting itself on the back at length for an apparently bold early twist, this is a film that feels unjustifiably self-satisfied at times.

If you found Deadpool‘s mix of cartoonish gore and lacerating quickfire gags satisfying, its sequel may not disappoint initially. With reflection, however, its homogeneity comes to rankle, more so given its fun-poking at other, often better films. If a third part is to come about, Reynolds and his team may wish to plan more carefully the actual reasoning behind its creation.