Spielberg is a banker, common sense dictates. Whether telling procedural spy stories, emotional war tales or evocative family yarns, he churns out the good stuff. Ernest Cline has demonstrated that this theory has a limit, and with a tired script based off that author’s hateful novel Spielberg has produced the nostalgia-ridden and flimsy Ready Player One.

Rarely can a film’s source material have been so irredeemable, an empty and embarrassing litany of references qua non. A YA novel telling a tale of a matrix-like cyberworld under threat, it plagiarised relentlessly and relied on the literally and figuratively masturbatory instincts of its readers to scrape by. Over time, its hateful and entitled ideology, representing the worst of so-called nerd culture, has been rightly criticised.

In its film version, the warmth of Spielberg’s filmmaking scales back these grim messages to subtext, but they linger. Our protagonist is Wade, played blandly by Tye Sheridan, living in dull slums skirting Columbus. He, with countless others globally, finds escape from the generically grim dystopia by living primarily in the Oasis, a Matrix-like VR universe. Here gamers can game all day, you can look however you want, and be whoever you want – tech evangelists appear to have won the war. 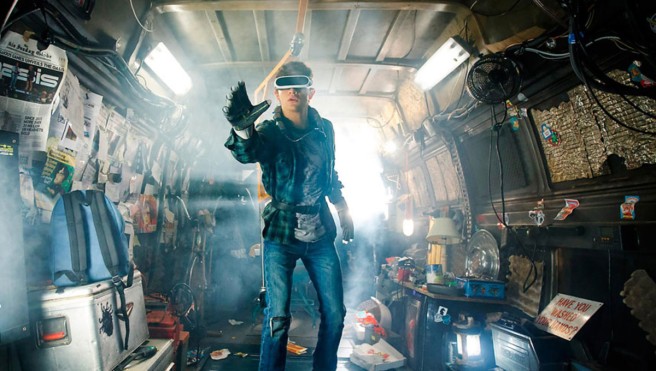 When the Oasis’s founder, a bizarrely-revered figure played with cringe-inducing commitment by a frankly miscast Mark Rylance, dies, he leaves behind a videogamey treasure hunt to nominate his universe-controlling single successor. Thus Wade, a swathe of other eager hunters, and a tranche of nasty corporations, vie to win the race to control this global resource. Ready Player One has no comment of interest on the morality of this scenario, no nuance whatsoever to offer regarding virtual worlds, currencies and power systems. Instead it focusses on how being a white male with reams of pointless knowledge at the expense of actual life experience entitles one to win at everything and get the (inevitable) girl.

She is Art3mis (shudder), and played with enthusiasm by a basically wasted Olivia Cooke, so electric in Me and Earl and the Dying Girl. Her smarts and her moves make her the obvious proto-heroine, but Wade is a guy, so go figure. As their merry gang expands and searches for clues, Ready Player One’s most obvious crowd-pleasing tactic becomes clear – references too frequent and wide-ranging to count or catch. From obvious Iron Giants to Ninja Turtles and Overwatch characters, the impression is that Spielberg (or his VFX crew) exploited every license they could get their hands on.

This VFX crew does splendid work, to its credit. The virtual world of the Oasis is beautifully rendered, though sorely lacking equally high-class art direction. The action has a real-world heft often missing from CGI-fests, and in being able to show rather than describe its worlds, the film maximises its advantage over the source novel’s trite prose. Indeed, Ready Player One is considerably better than its source, and by dint of Spielberg’s guidance, does boast the odd impressive sequence. Tactically tuning out the trad score, an early multiplayer city race is exhilaratingly shot in long takes, crunching collisions and near misses by dozens of participants blending the best of games like Trackmania, Burnout and Mario Kart for the viewer. Similarly, a Kubrick-inspired challenge level feels lifted from a smarter film, and uses the act of visual referencing to far greater effect compared to the normally scattergun approach.

More typically, though, Ready Player One’s scenes are predictable, its arcs tired, and its messages disingenuously traditional. People can be what they want, and do what they want, but when one teenager gets total control, he might just turn off the world’s access to give himself some poon-time.