Ruben Östlund’s new satire, The Square, is an epic shot across the bows of the art world, savaging pretension and selfishness. It is almost certainly overlong and over-ambitious, but contains moments of sparkling wit and toe-curling discomfort, and some truly memorable imagery.

Claes Bang, whom only Scandi fans will likely recognise, is the achingly cool Christian, curator of Stockholm’s X-Royal modern art museum. He is a perfectly pitched send-up of the elite intelligentsia by whom modern art, or at least its roster of gatekeepers and financiers, have become dominated. Interviewed by the tenacious Anne (Elisabeth Moss), he struggles to justify the existence of art and the relevance of curatorship in a manner familiar to all who have been asked a question they are fundamentally ill-prepared to answer.

When Christian’s wallet and phone are artfully stolen on his way into work, his sense of indignation overwhelms his admiration for the con, and he sets upon a course of bizarre revenge. Meanwhile he is trying to market and open a new exhibition, ‘The Square’, which shines a light on the unequal and ungenerous society that has developed around it.

If Christian represents the out-of-touch world of the gatekeeper and Anne the feckless and distracted ‘critic’, Dominic West’s flamboyant Julian, pyjama-wearing and laid-back, completes the triumvirate as the artist. They are each pathetic, but Östlund retains a basic empathy for his characters, offering tangible reasons for their behaviour. As Christian’s life unravels, Bang exploits his likeability to keep viewers onside, and the Danish actor’s performance is terrific throughout, confronting absurdity with an exasperated, steadfast sigh. 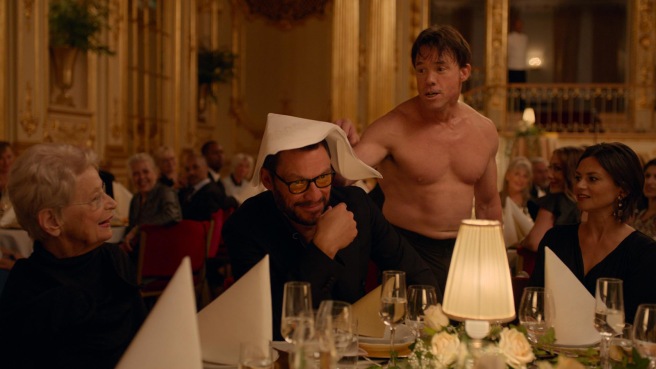 The Square plays out like an extended sketch show tied together by developing plotlines. We get recurring scenes in which characters act out silly debates and slapstick routines. From the ridiculous posturing of young, ‘tech native’ PRs, to fumbling attempts to distribute flyers as quickly as humanly possible, these setups are reliably amusing and occasionally jaw-dropping. Christian’s attitude to the disposal of a condom is a gangbuster revelation, a brutal reminder of his shortcomings, all the more fabulous for the fact that it’s basically understandable in the circumstances.

Perhaps the centrepiece of the film is an extended sequence in which Terry Notary plays Oleg, a performance artist who flawlessly imitates an aggressively territorial ape. Intended as an amusing distraction during a grey-haired fund-raising dinner, his performance quickly crushes the fourth wall, and becomes a terrifying ordeal. As a study of spectatorship and what it takes to make someone intervene, and as a pitch-black comic circumstance, it is impeccably executed.

Östlund’s use of sound is notable for its fondness for cacophony, as characters are ludicrously drowned out, pumped up and dispirited by music, clamour and mechanical noise. Yet, unfortunately, the final sequences of the film are drawn out in the manner of a 1970s fadeout, instead of ending on a more deliberate note. 151 minutes is a serious runtime, and The Square simply could have ended 20 minutes before it did. These last scenes drive their points home, but do so without the abandon and humour that preceded them, and Östlund’s satirical focus is fuzzier when applied to wider society instead of the art world specifically.

His razorblade sharpness is hugely impressive at points, however, and outstrips his previous film, Force Majeure. With the English-language cinema world now potentially ready for him and a Palme D’Or under his belt, it is an exciting time for this Swedish provocateur.