In recent years Greta Gerwig has begun to make good on her early promise, moving beyond the mumblecore trappings of her early acting work on film. Impressive turns in Jackie and 20th Century Women  have demonstrated her increasing maturity and now,  behind the camera, she has produced a wonderful and gentle bildungsroman, Lady Bird.

Saoirse Ronan is the irrepressible and eponymous youth, a Catholic-school girl bored by her tedious upbringing in Sacramento, California. She is as self-centred, likable, abrasive and sincere as any teenager, and cannot work out if her mother is her best friend or worst enemy. Laurie Metcalf plays this tiring matriarch, struggling to sustain her family and resorting to self-effacement in order to preserve their quality of life. Metcalf and Ronan circle each other beautifully and believably, throwing barbs despite their clear and deliberately spotlit similarities. 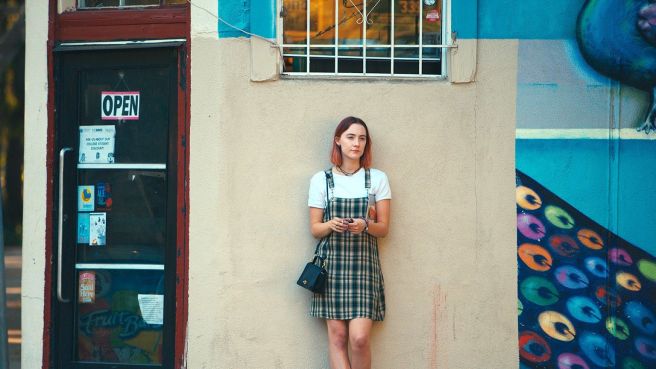 Lady Bird (née Christine) is applying to colleges, and facing up to the likelihood of a dull degree at a local institution. She dreams of the east coast, “where culture is”; yet, as with all adolescents, her long-term goals are utterly secondary in the face of momentary distractions. Her budding love life, attempts at popularity and nascent acting career all sideline her attentions and ours, with reliably heartening and amusing results. Each is the source of sharp lines and memorable quips – Gerwig’s original screenplay for Lady Bird is smart and tight affair.

Her suitors are a particular delight, with Lucas Hedges (after last year’s incredibly impressive Manchester By The Sea) adorably boring as the economically advantaged Danny. Even more satisfying is Timothée Chalamet, weaponising his superb turn as Elio in Call Me By Your Name against himself. His Kyle is the seemingly cultured arsehole we all knew at school, who doesn’t participate in the global economy by allowing his parents to do so for him, only smokes roll-up cigarettes to avoid microplastics, and self-confessedly hasn’t lied for two years. His laconic shithousery is a highlight of Gerwig’s characterisations.

Yet it is Lady Bird that is the film’s heart, and its tempestuous core. Ronan brings a grit to her task, happy to paint the youth as only redeemable on balance; teenagers are fairly uniformly horrible, Gerwig offers, but this is no reason to judge them too harshly. The transformative years they have ahead will temper them. Lady Bird’s confiding and conciliatory relationship with her father (the entirely sympathetic but passive Tracey Letts) is not a reprove against the ups and downs with her mother. It is simply a truth of family life that it is never simple.

As Lady Bird navigates the traps and worries of teenage development, she comes to love and hate many things, from boys to school, and her hometown is chief among them. Its archetypal tedious sprawl is one she relies on but wants to escape with every fibre of her being – sometimes.

The terror of the unsure, the thrill of the new, and the despair of failure are all visited upon Lady Bird, and her story is stronger for it. Gerwig tells her classic tale without judgement, and with tremendous empathy for her central figures, mother and daughter. Let us hope that she now ranges more broadly than her collaborator, Noah Baumbach, in future directorial efforts.