Black Panther arrives on a wave of cultural fervour, and has so far been met rapturously by both audiences and critics. The importance and worthiness of its success cannot be underestimated and should not be devalued. The film is not the movement, however, and Black Panther is only slightly above par for the Marvel course. Its original aesthetics ultimately fail to overcome its tired structure.

Chadwick Boseman is T’Challa, established as the heir to secretive central African nation Wakanda by earlier films. Black Panther begins with his ascension to the throne, soon to be disrupted by the return of Erik Killmonger, played gloweringly by the terrific Michael B. Jordan. He burns with fury at Wakanda’s self-preservation while racial inequality is sustained the world over, and challenges T’Challa’s grip on the throne.

Yet most are granted somewhere in the region of not enough lines, and are given trite functions to fulfill. The war-hungry fool, the loyal general, the reluctant spy and the concerned stateswoman. Their dilemmas are sometimes compelling but are never entertained for more than a moment, and those who mistake this hackneyed spread of biographies for sophistication are thinking wishfully. 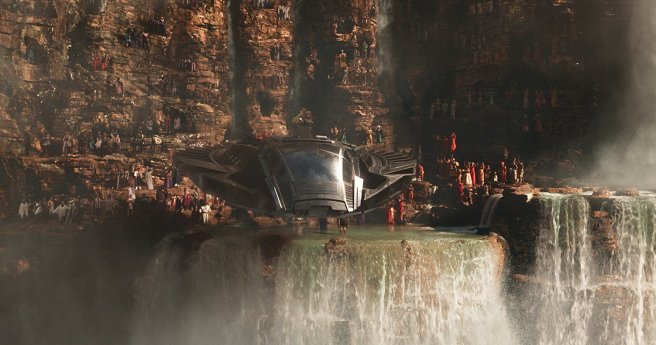 The exception to this is Jordan’s Erik, Marvel’s most compelling villain since Loki. The justifiable nature of his position (that Wakanda should arm BAME people the world over to fight oppression), the understandable ambitions he harbours – these are complex themes that Black Panther approaches far more bravely than most superhero films. Yet, by the end, it is clear that their subtleties will be lost moving forward. Complicated questions resolve themselves in simple, storybook conclusions, and an ending that feels saccharine and unsatisfying. For these dynamics to culminate in a ridiculous battle between supposed lifelong allies is outrageous.

A visual identity is a white whale for Marvel – their films are unvaryingly dull in their execution; Coogler succeeds on some levels in this arena. The odd shot is compelling, such as the jarringly inverted throne room when Killmonger’s residency begins. One of Black Panther‘s true victories lies in the costuming, with inspiration drawn from a variety of tribes and no hint of exoticism or fetishism at play.

It is a shame that these artfully clothed characters, themselves shallow in the main, are resident in a Wakanda that is comprised of:

This is not a city that feels credible or lived-in. It is a series of unconnected locations that we move between in a plot-conforming manner. CGI fills in the remainder of the locale unconvincingly and with a broad brush; indeed, Black Panther‘s effects work feels noticeably lacklustre, from fake rhinos to bemusingly unreal snow. It is quite simply jaw-dropping to learn that Bafta-winning Blade Runner 2049‘s production budget was a full $50 million less than this picture’s, when comparing the quality of output.

Coogler’s Creed was in many ways a superhero origin film, and its taut, muscular energy is comfortably superior to Black Panther. Perhaps sidelining Michael B. Jordan is one reason, but the more pertinent fact is that Marvel’s suffocating structural demands simply do not easily lend themselves to truly interesting stories or genuine political discourse.