This year’s awards season of releases has seemed at times to demonstrate a grand Hollywood collusion to chart the many ills of America. Three Billboards Outside Ebbing, Missouri, The Post, Downsizing – all have lambasted different elements of American society, lamenting its decline.

Richard Linklater has built a reputation on subtler explorations than these films, and Last Flag Flying is another such contemplation. We explore, gently and gradually, the timeless difficulty of military service, and the sacrifices it forces on combatants and their relatives. Steve Carrell, now surely established as a top-class performer, plays Larry, a beleaguered Vietnam veteran who reconnects with two of his old Marine comrades in an hour of need.

Bryan Cranston and Laurence Fishburne are these ghosts from his past, and are in many sections more prominently featured than Carrell, offering the comic meat of the film. Cranston’s Sal is a misanthropic alcoholic who has struggled to move on from the enlisted lifestyle, and lacks the ability to hesitate in conversation. His blithe, well-meaning offensiveness is expertly pitched, but feels at times too dominant in a scene – doubtless deliberately. His story is less interesting than Larry’s, bluntly put.

Fishburne rounds out this trio as a born-again pastor, who has apparently renounced his violent and wayward past, but of course quickly regresses in the more harmless ways available. These three don’t so much bounce off as needle each other, but the shared experiences they have endured bond them in ways that do not need expression in affection. 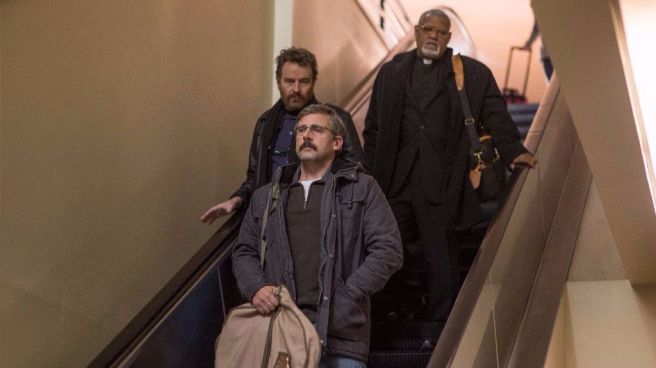 As they battle with the state apparatus to control the legacy of Larry’s family, the three slowly unfurl the past they have collectively sought to forget, and through a series of pitched conversations, decry the state of militarism in America. The film is set in 2003, with the Iraq war in full flow, and these three represent a hidden generation of US veterans. They clearly believe in the importance of military strength, and in the decision to serve; yet they are also disgusted with governments that have repeatedly lied to their populaces at the cost of thousands of young lives.

For the most part these questions are tackled by Cranston and Fishburne, filling the silence created by Carrell’s grief. This comic master turns in another sensitive and heartbreaking turn, generally in the background of a scene roiling in his inability to contribute, and uncertain of how to move forward. His hesitations and reactions are expressive, and, as he grows into the film with the help of his friends, his happiness comes to feel paramount.

It is perhaps a shame that Linklater is seemingly content with his character development and simple shot-reverse-shot dialogues. As effective as the filmmaking is here, it lacks a visual identity or flavour, and at times feels visually generic – in particular when Carrell’s magnetic and central anxiety is absent for short stretches. The dearth of female characters could perhaps be explained by its subject matter, but surely ought to have been mitigated.

Linklater is no stranger to emotional filmmaking, and the final moments of Last Flag Flying are a gentle and heartbreaking reminder of the film’s central point and motive. This is an enjoyable ride-along with a generation rarely shown with such a measured tone, and another thought-provoking glimpse into the military mind.