All of a sudden, without warning, Alexander Payne has dropped a clanger. After the quiet, consistent success of his previous films from Sideways to Nebraska, his latest effort is a mess, pure and simple. Downsizing is a confused and confusing film, naively nostalgic and structurally lazy.

Matt Damon is Payne’s everyman hero, playing Paul Safranek, a workplace physiotherapist who observes with gentle fascination as the technology of biological shrinking is announced, spreads and becomes mainstream. He and his tentative wife (Kristen Wiig) decide to take the plunge and shrink themselves to avoid economic discomforts and to chase the new American dream. 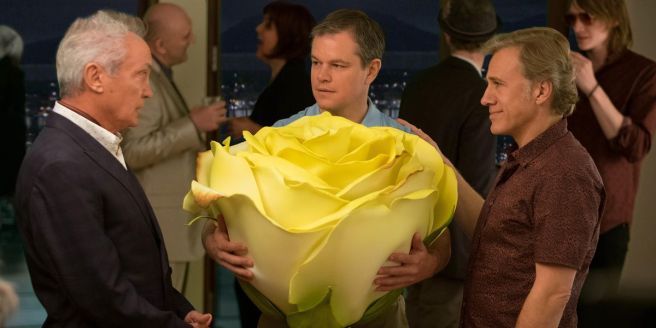 Expecting immediate cash richs due to literal-minded exchange rates, Paul quickly comes to realise that his life once small is not so different to its previous incarnation, and slides into depression. A ray of light is provided by cleaner Ngoc Lan Tran (Hong Chau), whose perspective helps him to see that maybe, just maybe, the social issues of the modern world and United States are not solved by shrinkage.

If this sounds trite, it should. Downsizing is as subtle as a slap in the face, and never seems able to decide on its targets. We bounce from social and racial inequality to environmentalism, waste and philanthropy, all examined with as much insight as a toddler trying explain the nuances of Russian literature. In specificity, the film’s central messages promoting compassion are repeatedly undermined by the stereotyped and retrograde characterisation of Ngoc Lan.

Put simply, in a trendy East London cinema in 2018, sections of the audience laughed at nearly every one of her lines on the grounds that her understandably shoddy English was a joke in and of itself. Hong Chau has right-mindedly defended her performance as accurate to the struggle of immigrants with no formal training in the language, and the laughter is primarily an indictment of the Great British public. However, Payne clearly and knowingly plays up the linguistic side of her punchlines, and in doing so seriously tarnishes his credibility. This sort of humour should be below a filmmaker with his relative pedigree.

Elsewhere, Downsizing does deliver jokes that are more straightforwardly enjoyed, but does so in such disjointed and meaningless ways as to be utterly forgotten with time. In terms of tone the film is split down the middle – its first half is reminiscent of a world of shoddy 90s comedies, from the awful scoring to its unbelievably straightforward pacing. The second meanwhile, is darker in tone but no less conventional; viewers will be surprised by precisely none of its twists or turns.

It is faintly bemusing that Payne’s contemplative, realistic portfolio has coughed up this oddity, big-budgeted, obvious and blithe. There is no innate sin in ambition, but for his ambition to be a poorly CGI’d extravagance so poorly executed marks a major misstep for the director.