Steamworld Dig was a jewel of a game, initially hidden on the 3DS, before spreading to every platform under the sun, accompanied by a magma flow of praise. Now, some four years later, a sequel arrives, perfectly and immediately suited to the Nintendo Switch.

This time we play as Dorothy, a supporting character from the first game, as she seeks to find Rusty, our previous protagonist, who has disappeared under mysterious circumstances. Her search leads her to the extensive mines under El Machino, a remote desert outpost. As before, the game is a Metroid-style action-explorer, disguised under a layer of block-by-block mine excavation. Players delve into the earth’s crust in search of answers, and the navigation of this underworld is Dig 2‘s principle gameplay mechanic. 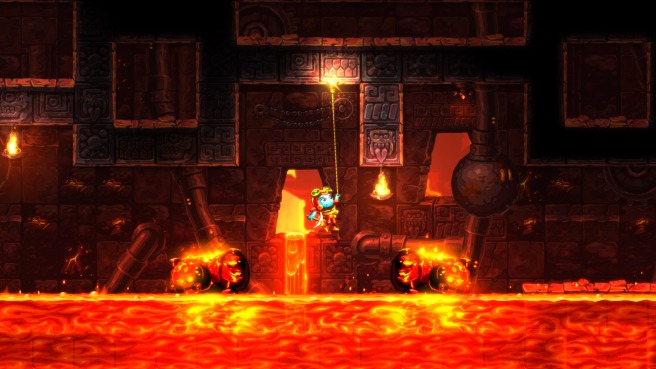 In order to get around the mines quickly and easily, routes must be planned – perhaps not with minute care but with relatively constant attention, and this remains engaging throughout the game’s brisk span. Each block excavated is a small decision made, an enemy potentially rerouted, a heavy rock potentially sent tumbling, or an alternate route accidentally blocked off. No mistake is permanently disabling, the level design ensures, and the feeling of agency is empowering and rewarding.

The game’s story is simplistic but cartoonishly charming, and moves at a decent pace; there are few lulls in direction or instruction. Early on, however, players are informed that they can turn off instructional map markers if they’d like, and this could perhaps have been stressed more. These markers ultimately encourage guided playthroughs, and disincentivise exploration, surely the game’s very point. They are optional but should perhaps be opt-in, not opt-out. 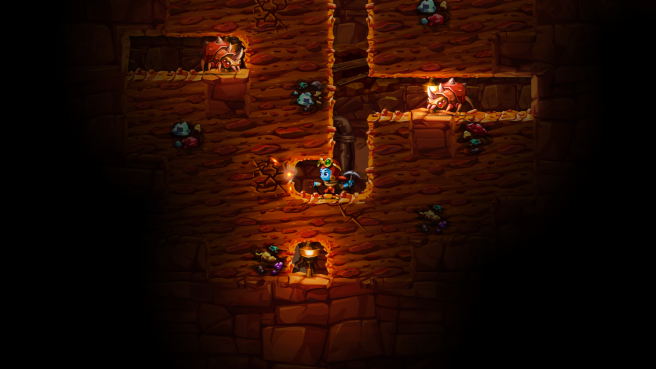 Dig 2‘s art design is charming enough, and builds on the visual identity left by its predecessor naturally. It lacks some ambition as far as art design are concerned however – in particular, quasi-boss fights in its latter stages are somewhat dull affairs in no small part due to their uninspiring design. The gameplay mechanics remain fresh, however, with abilities unlocking frequently enough to keep players engaged in their movement through the caverns they explore.

If Steamworld Dig was a delightful surprise, unheralded and unassuming, its sequel is a more expected success. By limiting their ambitions and sticking to the spirit of tight design choices made years ago, Image and Form have crafted another pleasant and solid outing. This lack of lofty aims is perhaps a slight disappointment, but doesn’t much diminish this enjoyable diversion.